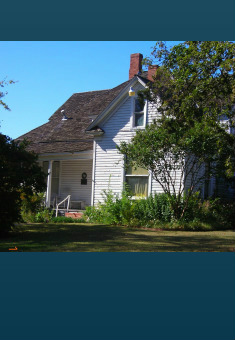 On the first day of March 1843, William and Nancy Jane Cochran arrived with their four children at Mustang Branch in Peter’s Colony in the Republic of Texas; today called Farmers Branch. In January of 1844, the family settled in their own cabin to be joined later that month by Nancy Jane’s sister and brother-in-law Mary and Isaac Webb.

There were lots of “firsts” in those days. Isaac Webb built the first chapel in spring of 1846. We all know that Texas became the 28th state of the union in March of 1845 with Dallas county being created one year later in March of 1846. William Cochran was the first representative from Dallas County to the Texas State legislature and the first “clerk” of the newly created county.

William and Nancy Jane purchased a section of land, 640 acres on what was later called Bachman Branch in 1851 for the total of $710. With a small house, barn and cotton gin with corn mill the Cochran family located on this piece of property that we gather on today.

It was in the mid 1850’s that the two Methodist societies of Webb Chapel and Cedar Springs decided to merge and build a church large enough to accommodate both. The Cochran farm was halfway between the two and Nancy Jane deeded 3 acres of her homestead, one acre for a family burying ground and two other acres for a new church. Nancy surveyed the land herself and wrote out the quaint old deed. For the sum of $1.00 the land was deeded to the Methodist Episcopal Church South on July 11, 1856; the first piece of deeded and dedicated church property in Dallas County.

All agreed that the name should be “Cochran Chapel” and construction of the first church building began. Lumber for the church was hauled in from Jefferson, Texas by wagons drawn by five yoke of oxen. The 30’ X 40’ building was completed and dedicated on 1858 without indebtedness; women seated on one side of the center aisle and men on the other…..guns stacked on each side of the door as protection against wild animals and prowling Indians.

It was decided in 1885 that the old church building was too dangerous to continue to use it. Quote: "Billy Taylor told me that he was afraid for his children to go there, and I told him we would have to build a new building. Billy and two others agreed head up the building committee and the construction." It took three months to build the church and it, like the first one, was dedicated debt free for sum of $600. It was a pretentious 40 X 70 foot frame building with a high peaked roof. Once again the men sat on the south side and the women on the north, with three benches on the south side for the Choir and three on the north side called the "mourners benches" or "Amen" pews.

During the year 1923, one account says the second frame church building became dangerous due to the length and height of the building. The walls would gently sway when the wind was high and gusty. The congregation was divided in opinion…..many stayed away on windy Sundays. Some thought that if you had to diie...in the church might not be a bad place to go. The new pastor that year was a “now is the time, never put things off” kind of person. One spring morning during the services with the walls visibly swaying, he voiced the need of a new church building and asked that all the men meet him early Monday morning at the church with hammers and saws. They did and before the congregation realized what was happening the old church building was completely torn down by nightfall.

The contract for the new brick church was let out on February 1, 1924. With $8,000 of the $10,000 needed, the old church torn down and a temporary place of worship secured, work began. On June 7, 1924, an all day celebration was held to observe the opening of the new brick sanctuary.

On, July 13, 2008, the beautiful, remodeled sanctuary of Cochran Chapel United Methodist Church, known as the Mother Church of Dallas County, was re-dedicated. From our early beginnings in a cabin in 1844 in Peter’s Colony to the present day on the corner of Northwest Hwy and Midway Road, this congregation has been offering Jesus Christ to the world. As Almighty God has blessed and prospered our past so may God continue to bless us and prosper us in the future!